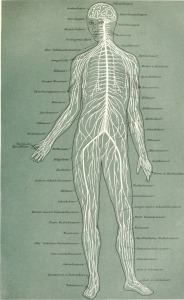 Imagine if you could take two zaps of electricity a day and be pain free. You could forget your pills and side effects. Farfetched? Maybe not. Dr. Kevin Tracey, a neurosurgeon, discovered that a chemical delivered to a patient’s brain for the purpose of reducing inflammation resulted in a reduction of inflammation in other parts of the body. Investigation  led to the conclusion that the vagus nerve not only delivers messages to the brain when an inflammation or infection occurs but also sends electrical signals in the other direction. These signals dampen the production of inflammatory molecules. The process  is called the inflammatory reflex.

In diseases such as rheumatoid arthritis and inflammatory bowel disease the inflammatory reflex is dysfunctional, and expensive drugs are prescribed. Some patients have serious side effects. Tracey and colleagues found that implanting tiny electronic devices, which could deliver electric shocks to the vagus nerve, resulted in the proper electrical signals reaching the inflammtion. I wonder if the shocks can be set to act as an alarm clock. Sorry.

Recently the NIH, National Institute of Health,  recognized the value of the work and awarded Dr. Kevin Tracey and Dr. Ping Wang grants to continue research in the area called bioelectronic medicine. The new study will focus on understanding the neural circuits’ identity and their control of immune responses.

Last fall DARPA— Defense Advanced Research Projects Agency— launched a program to generally study the use of electricity to control disease. The program is cleverly named ElectRx. It seeks means to deliver electrical stimulation easily and less invasively to exactly the right fibers.

The nervous system plays a vital role in maintaining all aspects of physical and mental health. A sophisticated network of sensory nerves continuously monitors health status and triggers reflexive responses in the brain and spinal cord when an infection or injury is detected.1  While the doctors on Star Trek Enterprise used medicine based on nerve networks, it seems mainstream  medicine has been neglecting this connection. I’m reminded of the theory of meridians of chi flow, the basis of acupuncture2.  Perhaps one can think of biolelectronic medicine as west meets east, but I digress.

If the science of this network could be completely understood, we might develop ways to restore normal signaling patterns and control disease by kickstarting the body’s natural ability to heal itself. DARPA will also fund a project for using electricity to monitor the body for disease. Early detection plays a critical role in health outcomes. Watch for an October launch according to Dr. Douglas Weber.

You’d think I’m hung up on medical science, but I’m looking for the most mind-blowing articles to share, and it seems that the most impressive ones recently coming my way are new methods to cure disease and manage pain. Not new pills—meh—but new approaches! Let me know what you find which stops you in your tracks.

5 thoughts on “Buzz your pain away?”

This site uses Akismet to reduce spam. Learn how your comment data is processed.